Winter Fishing at the Stanislaus

Starting off with a trip to the Stanislaus on January 2. I went down to the Stan with a fishing buddy and we started off checking out the water. After a little while I picked up a 12-13" rainbow right below the dam, using every fly I had in my box. He finally took one of my caddis patterns. Since it's so close to New Years' and just opened to fishing, there is alot of pressure on the Stan. Later we moved downriver, and with not too much searching, we both started hooking fish after fish after fish on some egg patterns. You just gotta know where to look! There were other fishermen above and below me so after an houe or so, I moved downriver a bit to find another spot below my buddy. I found a hydraulic section with nervous water that I KNEW had to have fish in it; and sure enough with some high-sticking technique I hooked up a huge 20" bow that I never knew existed in the Stanislaus-- I put the screws to him and pull him to the surface. But the fish is on one side of the river and I'm on the other; and I know all too well I have to be careful fighting him through the fast water or I could easily lose him downstream. So I jump off my rock and start following him downriver. ten minutes later I'm trying to land this fish in my 17" net while my buddy's laughing at me, falling all over the place. So all in all, I landed 9 fish in six hours which I'd say was a good day. There is still some great fishing in the winter! www.napavalleyflyguides.com 707-294-4738 Richard Loft 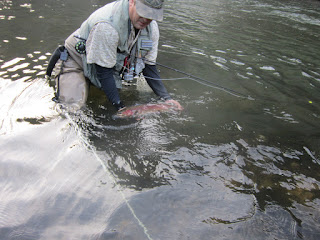 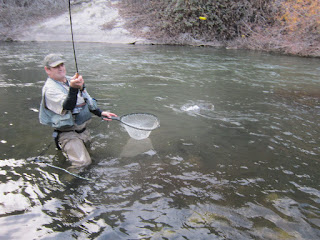 Posted by Napa Valley Fly Guides at 10:56 AM No comments: